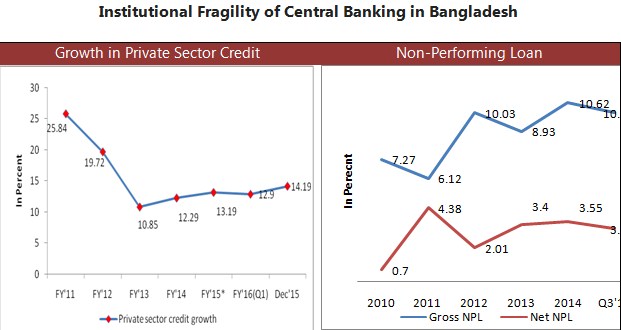 NGO News Desk :: The Unnayan Onneshan (UO), an independent multidisciplinary think-tank, in its assessment of recently announced monetary policy statement (MPS) by Bangladesh Bank for the first half of the FY 2016-2017 regards the MPS as a business as usual policy in exceptional economic circumstances.

The research organization reveals that the policy statement does not address the issue of weak banking and financial structure which is, as noticed in recent times, characterized by fraudulence, lax oversight, scam and illicit capital flight, disorganization, and captured governance.

Referring to stagnant private investment, the think-tank says that recent growth in private sector credit fails to boost private investment. Lack of business confidence in the economy coupled with recent rise in the incidence of terrorist attacks is likely to cause the stagnation to intensify.

In addition, the UO cautions that without increasing the quality, mere growth in private sector credit by the targeted level – 16.5% for the first half of the current fiscal year – may prove inefficacious in enhancing private investment and creating employment opportunities.

The think-tank evinces that the number of unemployed population increased at an annual rate of 5.29 percent during the period of 2000-2010 and increased from 1.70 million in 2000 to 2.60 million in 2010 while 10.6 million people were day laborers who did not have job security. Taking this trend into account, the UO comments the country needs to increase employment opportunities by two percent in order to enter the middle income group by 2021.

The UO observes that the decline in deposit rate is higher than that in lending rate. The deposit rate and the lending rate decreased to 5.67 percent and 10.57 percent respectively in May 2016 from 7.71 percent and 12.84 percent respectively in July 2014. Consequently, the average interest rate spread decreased to 4.90 percent in May 2016 from 5.13 percent in July 2014.

In regard to increased non-performing loan (NPL) vis-à-vis the total loan in the banking system, the think tank finds that the ratio of gross NPL to total outstanding loans of the banking sector increased from 8.8 percent at the end of the second quarter of FY 2015-16 to 9.9 percent at the end of the third quarter of FY 2015-16. The ratio of net NPL also increased from 2.3 percent in the second quarter to 2.9 percent in the third quarter. Meanwhile, capital adequacy ratio (CAR) decreased to 10.6 percent from 10.8 percent during the period under report.

Referring to persistent deterioration in the financial portfolio of the state-owned banks, the research organization shows that the government allocates Tk. 2000 crore as investment for recapitalization in the budget of the FY 2016-17. This allocation implies inefficient use of public money as the investment for recapitalization seems to validate the disorganization and ineptitude in the sector.

The shortfalls in capital in the banking sector can largely be attributed to the inefficiency in the sector caused by slack surveillance, frequent incidence of scam and fraudulence, captured governance, and poor risk management, adds the UO.

Calling for a cautious harmonization of fiscal and monetary policies that would cause both the money and fiscal multiplier to work in the economy and channel adequate resources for the expansion of productive capacities, the UO urges for creating a stable investment climate that would increase private investment and thus cause the national output to grow at the targeted rate.