NGO News Report :: Bangladesh is predominately a riverine country where the economy, society & culture of the people are shaped by around 700 rivers flown through this country. Despite of rapid urbanization and current trend of industrialization, about 80% of the people living in Bangladesh are directly and indirectly dependent on agriculture activities and thus on the large river system that exists in this region.

Still today, surface water is the main source of irrigation whereas this surface water mainly comes from the trans-boundary Rivers flown through the neighbouring countries and rain water. As a result of the erratic behaviour of rainfall, the importance of surface water (River Water) has increased significantly. Unfortunately enough attention and effort has not been given towards such important resource and due to lack of dry season flow in these rivers, use of ground water in irrigation, industries and household purpose has increased which are lowering the deep aquifer water reserve and ground water table.

So, river including its sediment and water is equally important for not only agriculture and livelihood, but also for environment & ecological balance, aquatic life and navigation. Consistent river flow is also essential for temperature balance, rainfall, erosion control, protection from salinity intrusion, ground water recharge, vegetation, developing greenbelt, etc.

Despite of the recognising the importance of river for the existence of Bangladesh by common people, government, Academicians, Civil Societies and Activists, there are lack of adequate initiatives by the government to save and protect the rivers. Instead, unplanned engineering hard solutions without considering socio-economic & cultural context are failing to bring long term solution of the water crisis in Bangladesh. Even the bilateral treaties and government policies on water management are highly biased towards structural intervention and lack the vision of looking at water from more holistic point of view.

In this context, AAB has taken initiatives to reimagining river from more humanistic & ecological point of view. River and its water is not an entity to be divided but it’s a shared resource & hence shared management is necessary. AAB believes that without regional initiatives in South Asia, it will not be sustainable for Bangladesh to take a standalone position on the current water crisis. From that point the “Water Commons” campaign of AAB has started with a vision to uphold the issue of river and its water from a common point of view beyond the political boundaries.

Along with the ongoing research and policy-advocacy initiatives regarding Water Commons, AAB has planned to establish a “Water Museum” to create a sense of awareness among the stakeholders especially the policy makers. This establishment will also work as a strong basis for policy advocacy on “Water Commons” campaign of AAB. This Water Museum will act as a call for actions to save the rivers in South Asia.

Opening of the Museum:

The opening ceremony of the water museum will take place on 29th December, 2014. Visitors from Dhaka, Committee members, Partner Organizations of the region, Community people, government officials, media, and tourists will be present at the opening ceremony. 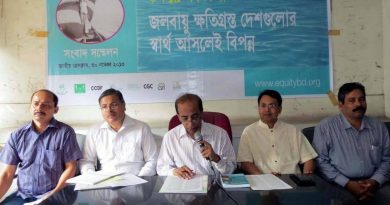 LCD has responds to US withdrawal from the Paris Agreement