NGO News Report :: The Unnayan Onneshan (UO), an independent multidisciplinary think-tank, in its monthly publication of ‘Bangladesh Economic Update’ September 2015, reveals that increases in per capita debt and debt service payment are likely to lower development finance and escalate intergenerational debt burden in the future.

The think tank further observes that the foreign debt-service payment is increasing over the periods, which indicates a decrease in the net foreign asset of the country. In 2013-14, the total service payment was USD 1294 million among which USD 1088 million was paid as principle and USD 206 million was paid as interest. The payment, however, reached USD 794 million where principle payment was USD 659 million and USD 134 million until February 2015.

Increasing government borrowing from domestic sources may, however, crowd out the private investment by causing the interest rate to rise. In July-May period of FY 2014-15, total domestic debt has increased by 32.93 percent from the corresponding period of the FY 2013-14.

Financing of budget deficit in July-May period of FY 2014-15 stood higher at Tk. 33883.09 crore compared to Tk. 27379.43 crore during the corresponding period of FY 2013-14, representing an increase of 23.8 percent.
In order to check the ominous effects of debt and deficit, the Unnayan Onneshan urges for the adoption of an immediate debt management policy through a harmonisation of the macroeconomic policies that ensures an effective fiscal management in the economy. 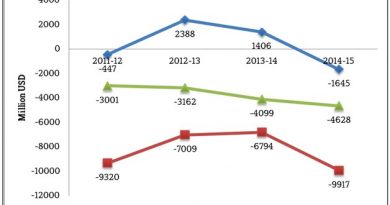