Staff Reporter :: The Unnayan Onneshan, an independent multidisciplinary think-tank, in its half yearly assessment reveals that the increasing gap between savings-investments may thwart the achievement of the targeted rate of economic growth this year.

The current issue of Bangladesh Economic Update that comes at the half way stage of FY 2012-13 and also marks the end of the penultimate year of the current regime states that this gap might be 5.14 percent of the nominal GDP in FY 2012-13 which was 3.95 percent in FY 2011-12. Assuming business as usual scenario and continuation of a three-year programme agreed between the government and the International Monetary Fund (IMF), the leading think-tank in its outlook suggests that the saving – investment gap might be 5.47 and 5.81 percent of nominal GDP in FY2013-14 and FY2014-15 respectively.

“The increasing savings-investments gap, the myopic fiscal-monetary policy mix stipulated in the IMF-MEFP, inflationary pressure and confrontational politics may hinder attainment of the desired level of growth in FY 2012-13,” the report adds.  In FY 2012-13, the government targeted 7.2 percent rate of growth in gross domestic product (GDP).

Referring to the contractionary monetary policy, the research organization reasons that the high rate of interest reduces the private investment and also fails in attracting foreign investment due to lower rate of real rate of interest, emanating from depreciation of local currency. In FY 2011-12, the foreign direct investment (FDI) as percentage of total investment was 2.67 percent, which is respectively 0.03,  1.05 and 1.98 percent less than those of FY 20110-11, FY 2009-10 and FY 2008-09.

Pointing out the upward trend in the rate of growth in budget deficit, the Unnayan Onneshan says that shortfall is increasing due to swelling subsidy in power sector and lesser disbursement of foreign loans and grants while overall debt is bubbling up rapidly. According to budget of FY 2012-13, the government targeted budget deficit at Tk. 520680 million, which is 12.39 percent more than that of FY 2011-12.

Referring to the continuous augmented allocation in annual development programme (ADP), the report however records that implementation of ADP has always remained much lower than targets. During the period of July-October of FY 2012-13, the highest ADP expenditure was in power division that was 34 percent of the total allocation and the Roads and Railway Division utilized Tk. 7162 million from the allocated Tk. 26522 million. The Ministry of Primary and Mass Education utilized only Tk. 11667 million out of the allocated Tk. 43822 million during the same period. Among them, the lowest share of ADP expenditure went to Ministry of Health and Family Welfare that was utilized only Tk. 4843 million that was 13 percent of the total allocation.

As regards the imbalance in the balance of payments (BoP), the research organization says that the import bill of crude petroleum and petroleum product in Bangladesh has been putting pressure while the rate of growth in export has remained short of the target. Between July and September of the current fiscal year, trade deficit was USD 77 million more than that of the same period of the previous fiscal year. This occurred because the increase in export earning was only USD 82 million whereas import payment increased by USD 159 million during this period.

The Unnayan Onneshan states that depreciation of Taka against USD further has increased the Taka value of import bills, thereby increasing the trade deficit. During the last four months of the current fiscal year, the average exchange rate was Tk. 81.58, which is Tk. 6.78 more than that of the same period of the previous fiscal year. Bangladesh Bank purchased USD 300 million from the local market to stop the depreciation of dollar in December 2012.

The think-tank also says that the rate of growth in remittance has decreased since FY 2008-09 except in the last fiscal year. Moreover, inflow of remittance in the current fiscal year exhibits a downward trend except for the month of October. 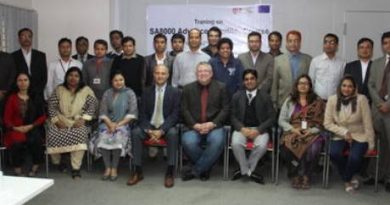 Press conference following the Thirty-Seventh Session of the IPCC in Batumi, Georgia