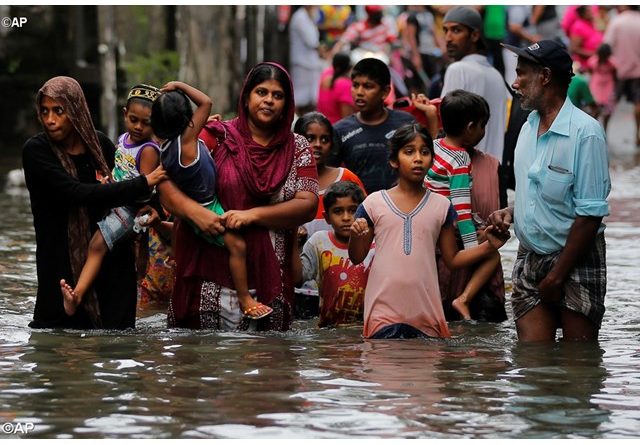 Devastating floods have left around one million people stranded and displaced tens of thousands of families across the east of Bangladesh, officials say. Floods triggered by a combination of surging river waters upstream in India and heavy monsoon rains resulted in the swelling of four major rivers, according to the state-run Flood Forecasting and Warning Center. Among the affected districts are Sylhet, Moulvibazar and Sunamganj in the northeast, and Bandarban, ‎Chittagong and Cox’s Bazar in the southeast.‎

Caritas Bangladesh, the social arm of the Catholic Church, is collaborating with government officials and is on standby to provide support where necessary. Mazharul Islam, disaster management officer at Caritas Chittagong said they have prepared a primary situation report on the affected people and losses. “This year, flooding was fast but it seems to be short-lived. Depending on flood damage and government support, we will offer our helping hand to people in need,” Islam said.

Daniel Snal, disaster management officer at Caritas Sylhet said they are monitoring the flood situation and have prepared a primary report for further action. “Between 300,000 and 400,000 people have been stranded by floods in the northeastern Sylhet region and hundreds of families have been evacuated. The government has started distributing relief material to the poor and for other people in need we will offer aid where the authorities feel the necessity,” Snal said. “We have prepared a primary flood assessment report to collect donations and to get government permission. If we are allowed, we will offer aid and rehabilitate the most needy people,” he added.

The government of Bangladesh has deployed disaster response teams to meet the emergency, distributing relief material and overseeing government shelters where some 2,000 families have been temporarily housed.

Low-lying Bangladesh is located at the floodplains of world’s largest river system, making it vulnerable to natural disasters like cyclones and flooding every year.