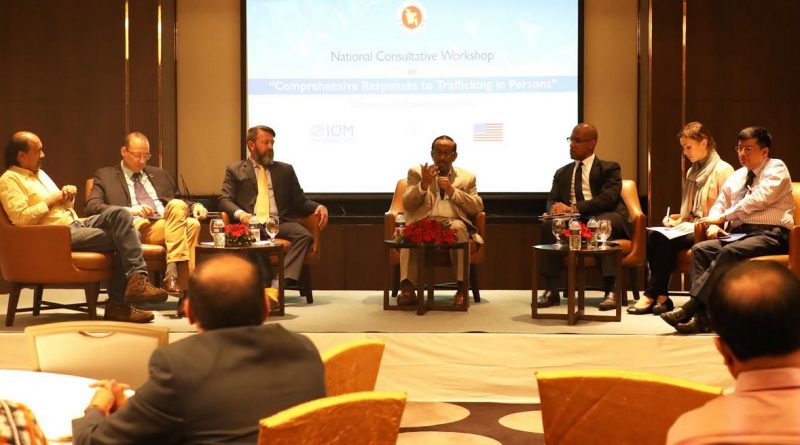 Irregular migration other associated exploitative practices create many vulnerabilities for a migrant such as restricted movement, debt bondage, forced labor, forced sexual exploitation, forced marriage, and slavery like practices. Vulnerable men, women, and children become targets of human traffickers. And, Trafficking is a crime which should be brought under control with the comprehensive effort of Government at all levels, development partners, law enforcement, civil society, the private sector, and all other relevant actors.

The discussion came in a National Consultative Workshop titled “Comprehensive Responses to Trafficking in Persons” held at InterContinental Dhaka on Sunday.

IOM Bangladesh as a coordinator and secretariat of UN Migration Network organized the event in coordination with Ministry of Foreign Affairs (MoFA) and Ministry of Home Affairs (MoHA) with financial support from U.S. Department of State, Bureau of International Narcotics and Law Enforcement Affairs (INL).

Trafficking in Persons (TIP) and Smuggling of Migrants (SOM) are global phenomena and they are also a growing concern for Bangladesh. According to the US State Department’s Trafficking in Persons (TIP) Report 2019, many Bangladeshis who migrate every year through irregular channels risk exploitation and abuse at the hands of smugglers and traffickers. TIP Report has put Bangladesh on Tier 2 Watch List for the third consecutive year in the wake of the government not meeting the minimum standards of trafficking elimination. This is an alarming state for Bangladesh and more needs to be done by all relevant stakeholders in the migration cycle.

Brent Christensen, Political/Economic Counselor, U.S Embassy in Bangladesh said, “We view trafficking in person as a serious crime. Bangladesh was ranked Tire 2 Watch list causing concerns for many people in this room. The report’s most critical recommendation advices Bangladesh to ‘significantly increase prosecutions and convictions for trafficking offenses.’ We believe Bangladesh has a constructive action plan to prevent human trafficking. The focus now must be implementation.”

Mia Seppo, UN Resident Coordinator in Bangladesh, said, “Trafficking disproportionately affect people who are already discriminated against and vulnerable to exploitation and exclusion. The main challenges revolve around coordination, capacity, resources and data. The efforts to prevent trafficking in persons require creative and coordinated responses. Trafficking is also a development issue. State must also do more to support the victims and survivors of trafficking.”

Vulnerable people become targets of human traffickers for different reasons, including sexual exploitation, forced labor, transactional marriages, child labor exploitation, trafficking in street children and trafficking for the purpose of organ trade. In some cases, migrant workers become Victims of Trafficking (VoTs) due to abuse and exploitation and to unethical recruitment practices by private recruiters and employers. Victims are smuggled to further away destinations such as India, Pakistan and Middle Eastern countries, resulting in the most corrosive forms of human rights violations.

Md. Shahidul Haque, Foreign Secretary of Ministry of Foreign Affairs, said, “The mode of trafficking is changing rapidly. If you want to combat trafficking with old model, you will be failed. There is a huge gap between actions and trafficking business. Trafficking a complex issue. Trafficking should be brought under the umbrella of migration. You can’t talk about migration, unless you talk about trafficking. We want to reduce vulnerabilities and we have taken lot of initiatives. Recently, Govt has decided to ratify Palermo protocol to prevent and protect trafficking in person.”

Addressing the issue at the consultation, Girogi Gigauri, Chief of Mission, IOM Bangladesh, said, “Lack of job opportunities, poor awareness on safe migration, high costs of migration are some of the pull factors to irregular migration. As a coordinator of UN Migration Network, we are prioritizing the rights and wellbeing of migrants and their communities of destination, origin, and transit. And, we are always with the government to end human trafficking.”

The Government of Bangladesh has taken several initiatives to curb trafficking in Bangladesh. It demonstrated significant efforts by finalizing and adopting implementing rules for the 2012 Prevention and Suppression of Human Trafficking Act (PSHTA) in January 2017, and by drafting an implementation roadmap for the 2018-2022 National Action Plan (NPA).

Md. Abu Bakar Siddique Additional Secretary, Ministry of Home Affairs, said: “Globally trafficking is the third largest business. We have already taken many institutional initiatives at national and local level to prevent trafficking. We have some limitations too. We have the shortage of manpower where migration smuggling is a big concerning issue. However, we have to work together to combat human trafficking.”

The consultative workshop brought together government bodies, UN agencies, donors and NGOs to how all parties can best support the GoB in its effort to combat human trafficking. Eric Opanga, Resident Legal Advisor, US Department of Justice, Mr. A K M Masud Ali, Executive Director, INCIDIN, Jonathan Martens, Senior Migrant Protection Specialist, IOM were among the participants who talked at the Consultative Workshop. 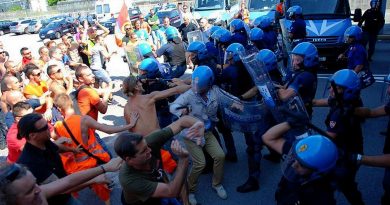