These are the outcome of ActionAid’s new report named “Mind the Adaptation Gab”, just before COP21. The report released globally on 17th November, 2015 is among the first to calculate the actual amount that rich countries should pay as grant. Grant-based adaptation financing to developing countries is paramount.

While rich countries are hesitant to increase the total amount of grant-based finance provided to cope with climate change and adaptation in developing countries; Bangladesh needs 40 billion USD from 2015 to 2030 to address adverse impacts of climate change, according to the Government of Bangladesh’s INDC published in September 2015.

“The impacts of climate change on vulnerable communities in Bangladesh and other developing countries are already massive. Approaching COP21 in Paris we need to see a road map that shows the scaling-up of public finance to at least $50 billion per year by 2020, and at least $150 billion per year by 2025, so that developing countries like Bangladesh can start implementing the adaptation work that is so urgently required, says”Farah Kabir, Country Director, ActionAid Bangladesh.

In the report, Mind the Adaptation Gap from ActionAid International asserts rich countries’ financial responsibility to support developing nations to adapt to the climate crisis. The report is based on investigation in six countries is the first to calculate the actual amount that rich countries should give based on estimates for future global adaptation need, and to compare this to their adaptation finance contributions so far.

According to the report, Rich developed countries, which have produced the majority of greenhouse gas emissions in the earth’s atmosphere and have the most historical responsibility for climate change, must acknowledge their obligation to support developing countries to adapt to climate change impacts. This must be done through providing means of implementation such as climate finance, technology transfer and capacity building.

The report comes as world governments prepare for the UN climate conference COP21 in December where a landmark global deal on climate is expected to be reached.

“It not fair Adequate grant-based, not loan based climate finance will be a key barometer of success for the world’s leader at the climate summit in Paris next month. Rich countries must deliver their fair shares of adaptation finance in the new global deal’, says Farah Kabir

Report says, Developing countries are particularly vulnerable to climate change. Adaptation in these countries will be challenging, costly, and must take place in addition to ongoing development efforts. There is still a great deal of assessment, trial and learning to be done with regard to adaptation. Investment in technology, communications, infrastructures, institutions, training, outreach and many other approaches will all be required 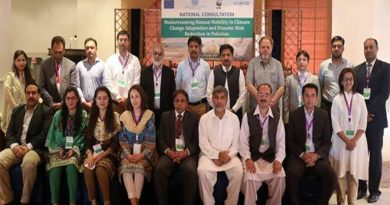