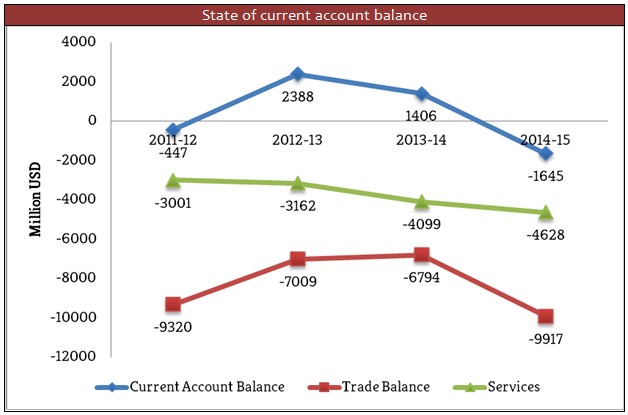 NGO News Report :: The Unnayan Onneshan (UO), an independent multidisciplinary think-tank, in its monthly publication of the ‘Bangladesh Economic Update’ October 2015 reveals imbalance in the current account of FY 2014-15 compared to that of FY 2013-14 is likely to exert pressure on country’s balance of payments.

In line with recent decline in total import, import of capital machineries is also on the decline implying the lack of entrepreneurship and productive capacity expansion, which together with current unemployment of large productive capacities in manufacturing sector may cause the rate of growth in Gross Domestic Product (GDP) not to reach the target.

Referring to the decline in disbursement of foreign aid, the research organization demonstrates that total foreign aid disbursements during the period of July- September of 2015-16 decreased by USD 0.11 billion or 17.66 percent and stood at USD 0.50 billion compared to USD 0.61 billion during July-September of FY 2014-15. Net receipts of foreign aid were also lower and stood at USD 0.26 billion in July-September of FY 2015-16 compared to USD 0.29 billion in the corresponding period of FY 2014-15.

As regards unsatisfactory inflow of FDI, the think tank shows that inflow of FDI decreased to USD 1480.34 million in FY 2013-14 from USD 1730.63 million in FY 2012-13, although FDI inflow reached USD 1833.87 million in FY 2014-15. Such inadequate inflow of FDI into Bangladesh in comparison with other countries of the same economic characteristics can be largely attributed to lack of infrastructural facilities and business confidence in the country, adds the UO.

Calling for a thorough reexamination of the current trade and industrial policies to address the structural bottlenecks, the UO urges for the adoption of new strategies aimed at expanding country’s productive capacities that enhance utilization of productive resources through efficient entrepreneurial capabilities and increased production linkages.

Youth Unemployment will be the Theme of Sixth Social Business Day