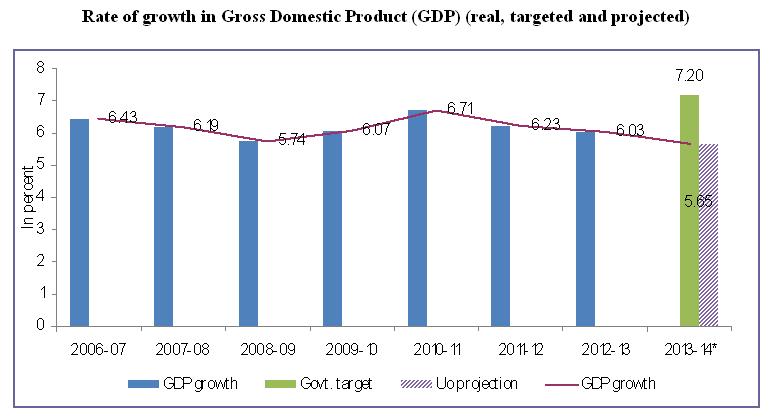 The Unnayan Onneshan, an independent multidisciplinary think-tank, reveals that the gross domestic product (GDP) in the current fiscal year is likely to experience a decelerating rate for the third time in a row from those of the preceding years.

The research organisation’s half-yearly assessment of the economy, coinciding with the end of the calendar year and the completion of the tenure of the present government, also states that the growth in GDP may fall below the decadal average of six percent due to fiscal and monetary management trap, functioned by lack of policy farsightedness and political contestations.

“The major reasons of failing to achieve the targeted level of growth of the current fiscal year are the increased gap between savings-investment, mismatch between investment demand and growth of credit to the private sector, poor rate of ADP implementation, failure to achieve the targeted level of revenue, reduction in public spending in physical infrastructure and social sectors. These have been accompanied with political contestations,” explains the think-tank.

The Unnayan Onneshan observes that several policy-induced macroeconomic challenges have severely restricted the maintenance of upward mobility of rate of growth in the recent fiscal years and the continuation of progress in different social sectors.

“The measures proposed in the budget, coupled with a contractionary monetary policy and orthodox exchange-rate management agreed as part of a three-year programme between the government and the International Monetary Fund (IMF) have led to slide in the rate of growth,” explains the leading thin-tank.

The Unnayan Onneshan points out that the lower collection of revenue is likely to reduce public investment, especially in infrastructure and social sectors, causing economic growth to decline. “To finance this increase in revenue expenditure, the government may have to go for further borrowing and thus trapping the country in a vicious circle of spiraling debt and deficit,” it adds.

Simultaneously, the think-tank says that fall in revenue collection also means that the government has to increase its borrowing from both domestic and foreign sources and the former may crowd out private investment.

The organisation observes that the narrow tax base along with structural weakness and the wide opportunities of evading and avoiding tax have added difficulties to collection of revenue in the present fiscal year.

In the first quarter of the current fiscal year, supplementary and excise duty on import have witnessed negative rate of growth at 5.66 percent and 24.03 percent respectively against the corresponding period of the last year. A lower rate of growth of 4.52 percent and 16.63 percent has been observed in custom duty and value added tax (VAT) against the same period of the previous year.

The research organisation projects that at the current rate of revenue realisation, the gap between targeted and actualised revenue may increase to TK 8.18 billion, which is likely to reduce public expenditure in real and social sectors.

Public expenditure has already been suffering from either lower allocation or lower rate of growth. During first quarter, total implementation of the ADP has stood at Tk. 227.25 billion, which in actual amount is Tk. 0.68 billion less than the amount of the previous fiscal year. The allocation in the agriculture sector has decreased by Tk. 23.71 billion from the revised budget for FY 2012-13.

Referring to the linkage between expansion of credit and growth in investment, the Unnayan Onneshan notes that the decline in the rate of growth in credit will drag down investment and consequentially slide down the GDP. The rate of growth of credit disbursement to the private sector in July to September, 2013-14 over July to September, 2012-13 is 10.18 percent, representing a 5.32 percentage point gap as the target in the monetary policy statement (MPS) was set at 15.5 percent.

The disbursement of industrial term loan stood at Tk. 8880.79 crore in the first quarter of the current year, which is the lowest among the last five quarters. The disbursement of the agricultural credit stood negative at 5.4 percent in October of 2013, compared to the positive growth rate of 143.2 percent in September of 2013.

Besides the large scale scams, the risk management in the banking system has weakened, observes the Unnayan Onneshan. The overall return on assets (ROA) that measures the efficiency of the management in generation of earning to assets stood at 0.60 percent in 2012 compared to 1.3 percent in 2011.

The Unnayan Onneshan also points out that the reduction in poverty has slowed down as poverty reduced by 8.9 percentage points during 2000-2005 while during the successive five years (2005-2010) the total decline was 8.5 percentage points.

The organisation recommends for adjustment of monetary policy with fiscal policy since reductionist policies only cut down investment demand, creates unemployment and in turn hampers growth. It also proposes structural reforms in tax structure, strengthening institutional capacity in the areas of net, burden, avoidance and evasion of taxes in the backdrop of rising pressure on revenue collection.

Trading Away the Ebb: Half Yearly Assessment of Bangladesh Economy