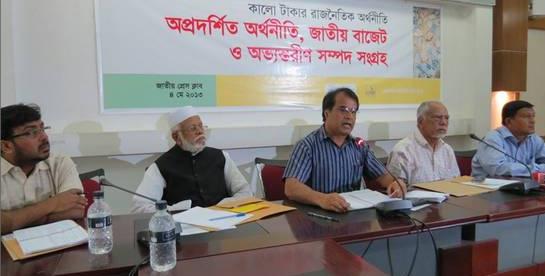 Abu Baker :: Speakers urge political leaders for strong commitment to stop all source of black money today in a seminar organized by EquityBD, a network of right-based organizations in Bangladesh. They have also commented that confrontational politics is mainly responsible for capital flight, as it increases the sense of insecurity in the country. The current yearly capital flight is around $1.8b, which is much greater than the total annual foreign aid and loan of $1.2b.
The seminar titled “Political economy of black money: Undisclosed economy, National budget and Internal resource mobilization” held at the VIP Lounge of the National Press Club today is moderated by Rezaul Karim Chowdhury of EquityBD. Keynote presentation is presented by Ahsanul Karim of EquityBD. Other speakers of the seminar are Dr. MA Mannan, Member of Parliament (MP), Professor Abu Ahmed of Dhaka University, Dr Mahbub E Rashid, Member of University Grant Commission, Khawza Main Uddin, President of Economic Reporters Forum, Asgar Ali Sabri of Action Aid, Zakir Hossain Khan of Transparency International Bangladesh (TIB), Mahbubul Alam of WBB Trust and Prodip Kumar Roy of Online Knowledge Society.
During the keynote presentation Ahsanul Karim says that in South Asia, Bangladesh has the highest percent of black money of around 38% while in India it is around 23%. Bangladesh can follow Indian examples in taking different internal and external measures to control the black money and increase  direct tax ratio in revenue mobilization.
Professor Abu Ahmed says that, in view of the election manifesto present party in power, Prime Minister and other Members of Parliament must declare their wealth statement. He also urges that present parliament must pass the long awaited Financial Reporting Act which is fundamental to develop reliable audit reporting. He also mentions that confrontational politics is basically responsible for creating insecured social situation, in fact, which is causing the capital flight. He also demands that multinational companies (MNC) must be transparent in disclosing how much of the profit they are repatriating.
Zakir Hossain Khan of TIB raises question on the role of Anti Corruption Commission and National Board of Revenue, which is not proactive and dubious. He also says unless the political leaders are sincere the country hardly be able to achieve tax GDP ratio 15% by 2015.
Khawaza Main Uddin of Economic Reporters Forum urges that in next budget there should not be any scope of whitening black money. he says that there are disparity of tax percentage for sincere tax payers and black money makers. He also urges that official election expenditure for the Member of Parliament should be nhanced and there should state exchequer support in this regard.
Asgar Ali Sabri of Action Aid says that country should take imitative to do agreement with different countries on inter-country tax information sharing and transparency.
Dr. MA Mannan, the Member of Parliament said that election expenditure limit should be practical and officially enhanced with source disclosures, so that the MPs should not start with a false statement.
Rezaul Karim Chowdhury, the moderator of the seminar urges that country’s politicians must shun the politics of confrontation, which is the biggest cause of capital flight and biggest patron of black money holders.

Campaigning Against Pesticides and their Companies