NGO News Report ::  The British Council and German Development Cooperation, the Deutsche Gesellschaft für international Zusammenarbeit (GIZ) GmbH, on behalf of the German Government, signed a Memorandum of Understanding on 29th of October at the Sarina Hotel, Banani, Dhaka to facilitate the implementation of “School Integrity Units”, which have been formed through an initiative of the Bangladesh Anti Corruption Commission (ACC).

The signing ceremony is to be followed by a three-day training course to master trainers who will be responsible for training the School Integrity Units in five districts: Rangpur, Mymensingh, Madaripur, Comilla and Gopalganj. A total of 52 people coming from a range of organizations including ACC district staff, teachers, members of Corruption Prevention Committees and NGO’s will be trained. The trainers will visit schools to sensitize and educate young people towards corruption and its negative effects. The philosophy follows the requirements of the Government National Integrity Strategy. The measure will be initially taken out in 50 schools in each of the five districts plus 60 more schools spread around the country.

Richard Miles, Principal Adviser of GIZ said “The National Integrity Strategy recognizes the importance of training young people about the consequences of corruption on Bangladesh. This training, supported by the ACC, will establish a core group of trainers who can help young people to avoid corruption and other evils they will encounter as they enter society as adults.”

Robin Davies, Director Partnerships and Programmes of the British Council said, “The British Council creates opportunity for young people worldwide to become global citizens, and our ‘Connecting Classrooms’ programme in Bangladesh follows this aspiration. We work closely with the Government to increase our reach to teachers and students across Bangladesh. This partnership with GIZ is a very timely and necessary initiative to engage the next generation of Bangladesh on issues around corruption and the values of global citizenship. The British Council is very privileged to work with ACC and GIZ in this important area.”

The project will run for an initial three years with a probability of extension beyond that period. Officials from the British Council and GIZ witnessed the MoU signing ceremony. 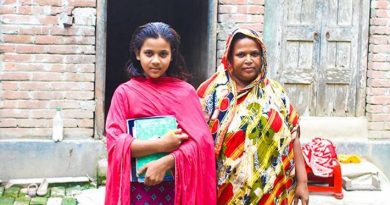 Training in GIZ for the garments sector improvement