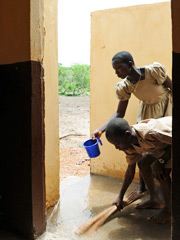 NGO News Desk ::14 November 2012: It’s World Toilet Day on 19 November. Everyone’s got a bad toilet story. But what if squatting behind a bush was your everyday reality? No-one likes talking about poo – but let’s face it, toilets are arguably the single biggest thing that, if taken away, make life completely intolerable.

Most of us tend to take toilets for granted, but around the world, millions of people do not have access to clean, hygenic toilet facilities.

One in three people in the world are forced to defecate in the open, choosing fields, train tracks, woods or rivers because they have nowhere else to go to do their business.

For some, it’s a cultural habit – officials in India say there is stiff opposition in most villages when they try advocating the use of toilets – but for most, it’s a case of pure necessity.

Children washing a toilet block built by Plan in Togo

In India there are now more people with a mobile phone link up than there are with a toilet, and diarrhoea kills more children every year than AIDS, malaria and measles combined (WHO 2008).

It appears that the worst case scenarios are concentrated in Africa, where, in a large number of countries, the cash flow for sanitation is under 50% of what is required to meet Millennium Development Goals (MDG) targets. Whatever little money has been allocated is being poorly used. The result? Diarrhoea is the third biggest killer of children in Sub-Saharan Africa.

The subject is a complex one. Many countries have funding for sanitation but lack the experts to advise on how to use the money. Toilets have cultural implications in many countries – the issue of how to build them, where to put them and other considerations is a complicated one and if no-one galvanises to address these issues, toilets won’t be built.

Modern flush toilets use 10 times the average daily drinking water requirement – and are thus hopelessly ill-suited to countries and villages with poor access to water or sewerage networks.

Technology is currently being developed to address this problem and in August, the Bill & Melinda Gates Foundation awarded a prize of US$100,000 to Dr Michael Hoffmann, professor of environment science and engineering at the California Institute of Technology, for his team’s solar-powered loo design that is hygienic, sustainable, cheap to operate and capable of working without connections to water, electricity, or sewerage networks.

According to Gates: “Inventing new toilets is one of the most important things we can do to reduce child deaths and disease and improve people’s lives.”

This discussion might begin with toilets – but its implications reach far further than the bathroom. Girls particularly are affected by lack of good sanitation – a lack of adequate latrines in schools is a massive barrier to education for adolescent girls, particularly when they start menstruation. Dilapidated, uncared-for latrine areas are often a focal point for gender-based violence, with girls targeted for rape and abuse when they go to the loo.

While the world has now met MDG targets for safe drinking water, progress towards the basic human right of basic sanitation is shockingly slow. According to OECD, there needs to be investment of more than US$35 trillion in order to deliver sustainable water and sanitation services for everyone who needs them.

Everyone has the right to dignity in life; and, as a colleague puts it, “water is relief; sanitation is dignity”.

See how children in Cambodia are increasing toilet coverage

Keeping Nutrition at the Center of CARE’s Work